Hafiz Khanbhoy hailed from a town called Kapadwanj in Gujarat where he along with his brothers plied modest ventures to make a living. Around the 1890s, Hafiz and his brothers decided to explore the markets of the Arab world, particularly Basra, Iraq, which was renowned for its pearls. In those days, pearl-diving was a coveted occupation and considered to be a source of great wealth. Even today, many families in the Middle East recall how their forefathers initially accumulated their wealth through the trade of pearls.

En route to Basra, the party alighted at the port of Bahrain and came to know that pearl diving was a thriving economic activity there as well. It compelled Hafiz Khanbhoy to stay in Bahrain and not move onwards to Basra.

The Khanbhoys started trading in pearls, exporting them to India and importing spices, agricultural produce and zari, (a type of gold thread woven on clothes giving it a rich texture). Zari became the highlight of their Indian imports until the mid-1930s.

Interestingly, Hafiz Khanbhoy’s legacy was to be continued by his four nephews as his children were not keen on migrating to Bahrain when they were comfortably settled in India. In those days, merchants used dhows to travel and journeys panning the coast of the Indian peninsula were not always smooth

With a new generation of brothers joining in, the business thrived and after the Second World War, made new forays into paint and hardware. Of the four brothers, Aabedin was the most active and dynamic in the venture. He was also one of the founding members of the Bahrain Chamber of Commerce. His contributions in the business sector earned him much praise. The Governor General of India offered him the title of ‘Khan Sahib’ – an honorary title given to distinguished persons residing under a British protectorate. Aabedin however politely declined and humbly asked for the eldest brother, Abdulhusein, to be recognised instead of himself. From then onwards, the venture came to be known as ‘Khan Saheb Abdulhusein and brothers.’

Zahid Bahrainwala, now the third generation of the family business remarks, ‘As the children began entering the business, we started to expand. By 1967 we had shops even in Dubai and Abu Dhabi, which were not sought after destinations back then. The transition of business from one entity to another was instinctive for us.’’

In 1977, the company signed up with a Bahraini partner and became known as Nasif and Khansaheb Abdulhusein and Brothers. By the 1990s, the company was mainly dealing with Industrial tools and eventually relocated to the prominent ‘Sitra Industrial Area’ in Manama. Today, Nasif and Khansaheb cater to a wide range of industries including marine, construction and oil. They also have exclusive distributorship rights of renowned international brands in Bahrain. 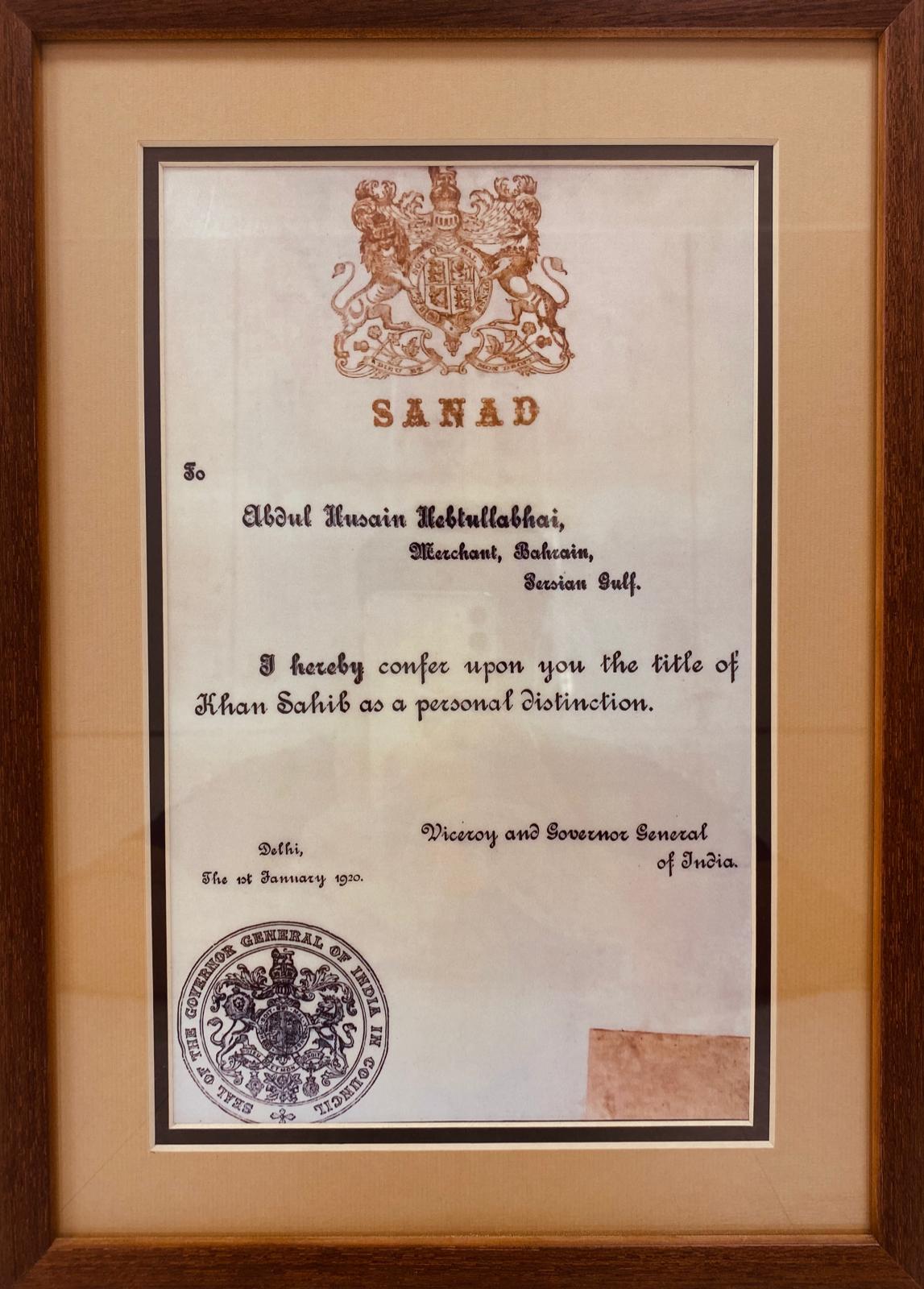 Sanad (citation) of the title of Khan Saheb conferred upon Abdulhusein Khanbhoy by the British Administration.

What initially seemed like a ‘perchance’ settlement in Bahrain, gradually took shape into a successful business company spanning across multiple sectors. Today, the Bahrainwalas (née Khanbhoys), have the distinction of being the oldest Dawoodi Bohra Business venture in Bahrain and continue to thrive in the land they have called home for almost a century now while doing their bit to dutifully give back to society.